Warm greetings to the Peace Makers around the world from Japan,

In 2011 Earth Kids of  Iwate was asked to participate in the Peace Pals Art Exhibition and Awards by the WPPS Japan office.

The theme of the contest was very timely for Earth Kids in Iwate, since we were hit by the Great Eastern Japan Earth Quake and Tsunami and we wanted to respond to the kind messages from the various countries to Japan.  We are very happy that some of our children were chosen each year as winners or finalists since then.  Earth Kids children will participate in the contest this year again.

I have been giving classes as an art lecturer at Senmaya high school since this April when the Japanese new school year started. The upper age limit was 16, so it was my first idea that I will give my 10th grade students a chance.  Indeed school curriculum schedule is tight, so I decided to let my students who finished their task early to work on the contest. 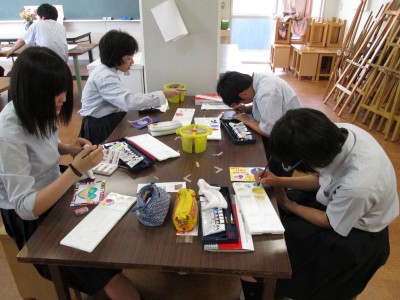 The students seemed to be very new to paint such a theme given by the contest, so they struggled finding an idea for their painting, but still they enjoyed.  I teach my students in my class that “True Art contains the consciousness of positively creating peace.”  The students experienced finding such a consciousness within themselves through this art production for the contest.

May Peace Prevail on Earth