For the seventh consecutive year Jim Dugan, staff member at The World Peace Sanctuary presented the World Peace Flag Ceremony at the Gathering of the Vibes Music and Arts Festival. This is the second year Jim has set up a booth to interact with the 20,000 plus attendees at this 4-day camping festival. Jim placed Peace Poles all around the 13 acre concert field and on each of the three stages that were shared by artists, such as: The Black Crows, John Butler Trio, The Roots, Blues Traveler and nearly 40 other national and international touring musical bands.  Once again, Peace Activist, Wavy Gravy joined Jim in the World Peace Flag Ceremony as it was broadcast live on the Bridgeport Connecticut National Public Radio station!  The Kids Peace Parade came marching onto the field to join in the World Peace Flag Ceremony with youngsters carrying colorful world flags, accompanied by a full brass band and numerous giant puppets. 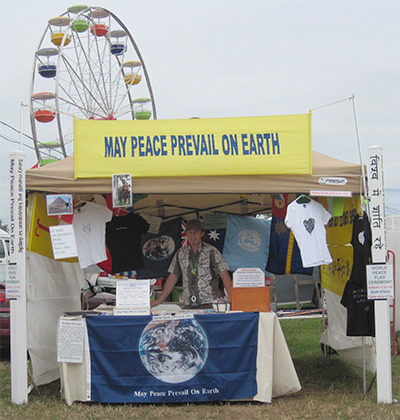 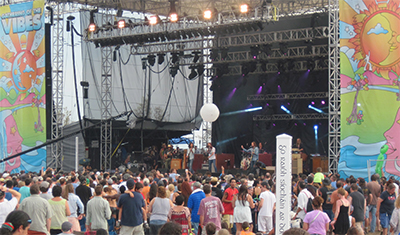 Many thanks to WPPS volunteers, Carol Winters and Andrew Cataldo for their tireless assistance.