May 29th was a sunny bright morning in Berkeley, California. Sixth graders at the Willard Middle School made preparations for the dedication ceremony by wrapping their Peace Pole in colorful paper and ribbons to unveil during the program. 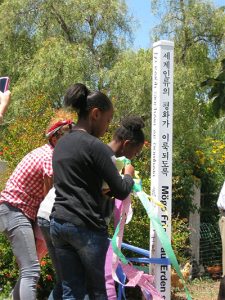 On the way to the school garden where the Peace Pole was waiting for them, each student picked up a cookie baked in the shape of letters to spell the word – PEACE. 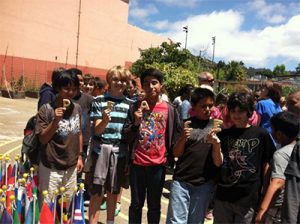 The Principal opened the ceremony by addressing the students about their commitment to peace as a school and as individuals. Several students unveiled the Peace Pole and the message, May Peace Prevail On Earth, was read and repeated in various languages.

Flags representing every world nation were passed out to the students who eagerly awaited to participate in the World Peace Flag Ceremony. The loud and clear voices of the children were filled with wonder and excitement as they called out the names of each of the 193 countries of the world for peace to prevail on earth. The hearts of the children, parents and faculty alike became one united voice for peace on earth sending ripples from Berkeley out to the world. 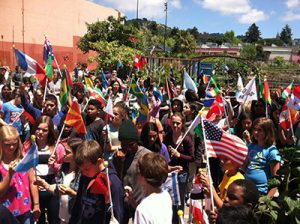