March 3rd, 2010
Mayor Flanagan unveiled the first Peace Pole as a part of the Violence Prevention Task Force Peace Pole Project. Mayor Flanagan held a press conference to present the Peace Pole to the city. Wendy Garf-Lipp, United Neighbors of Fall River Executive Director, spoke about the visual reminders that the Peace Pole will create. Christian McCloskey, Youth Services Coordinator, was also in attendance to speak about the upcoming Peace by Piece Summit. The summit brings together over 20 organizations within the city with the goal of promoting peace. There will 7 different workshops informing attendants how to promote peace and deal with various types of violence that they may encounter throughout their lives.

March 8th, 2010.
Mayor Flanagan of Fall River, MA unveiled a Peace Pole at Government Center today in an international initiative to promote peace. The Peace Pole by staff and students from St. Vincent’s Home. Each side of the pole reads, “May Peace Prevail On Earth,” in the languages of English, Spanish, Portuguese, and Khmer.

The Peace by Piece Summit is hosted by the Violence Prevention Task Force in partnership with The Youth CHOICES collaborative. The second annual Peace by Piece Summit was held on Saturday, March 27, 2010 at 10am – 3pm at Kuss Middle School, 52 Globe Mills Avenue, Fall River, MA. It is a free event for anyone who works or lives in the city. Lunch will be served. Please register for the event, click here. For more information feel free to contact United Neighbors of Fall River at 508.324.7900

May 12th, 2010
THE FIRST OF MORE THAN FORTY-FIVE PEACE POLES created by 25 local organizations as part of the Peace by Piece Summit was “planted” at Griffin Park on May 12, 2010 to symbolize the Peace Poles that will be planted throughout the City of Fall River. The event was one of several initiatives aimed at creating a more peaceful community by raising awareness and promoting empowerment, collaboration and connection to reduce and prevent violence. “Throughout the City, both indoors and out, Peace Poles will be planted to serve as a constant visual reminder that peace is truly attainable if the community works together,” stated United Neighbors director Wendy Garf-Lipp. Ann Marie Robustelli, of The World Peace Prayer Society gifted handcrafted desktop Peace Poles to be given to Mayor Flanagan, Acting Fall River Police Chief Dan Racine, Bristol County DA Samuel Sutter, and the Fall River Shannon Community Safety Initiative. 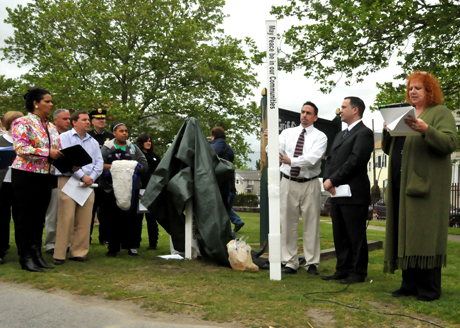 United Neighbors of Fall River Executive Director Wendy Garf-Lipp describes the significance of Peace Poles as Fall River Youth Coordinator Christian McCloskey and Mayor Will Flanagan looks at one of the 60 poles that will be planted across the City. 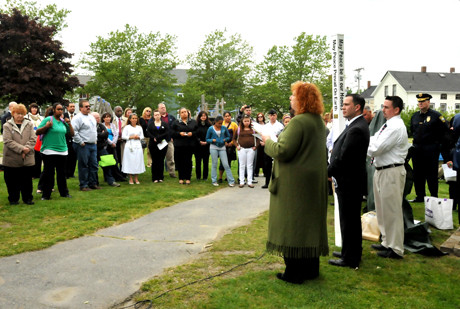 More than one hundred and sixty people gather at Griffin Park at the center of Fall River to mark the Peace Pole Day, the start of an on-going, multi-tiered, city-wide approach to bring peace to Fall River. The event was one of several initiatives aimed at creating a more peaceful community by raising awareness and promoting empowerment, collaboration and connection to reduce and prevent violence. 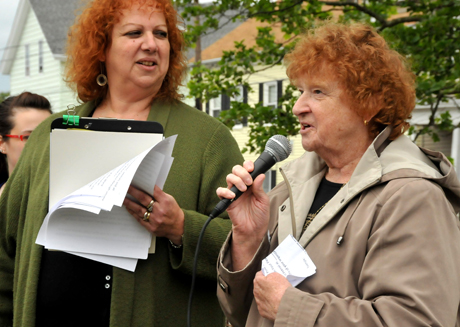 Sister Rosemary of St. Vincent's Home, one of over 45 agencies that will be planting a total of 62 Peace Poles both indoors and outdoors in the coming weeks, states her agency's pledge to use a Peace Pole to provide a positive message of hope and inspiration while United Neighbors of Fall River Executive Director Wendy Garf-Lipp looks on. 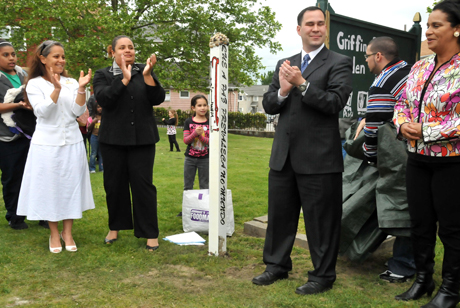 D - Rev. Marangelien Jovet, left, of the House of Restoration The Good Samaritan on Morgan Street and Carmen Andino, right, of the Corky Row Tenants' Association, applaud the unveiling of the Griffin Park Peace Pole along with Mayor Will Flanagan. 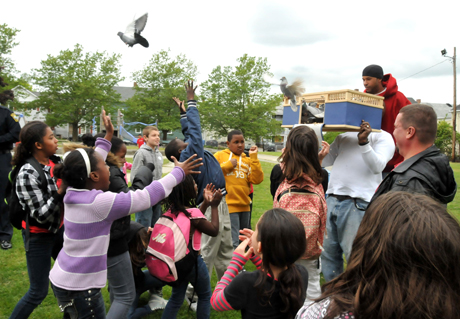 Homing pigeons are released in front of dozens of children gathered at the ceremony to symbolize peace.

“It is truly an honor to award our handcrafted Desktop Peace Poles to the recipients who have selflessly and immensely contributed to promoting nonviolence in the Fall River community.”
The Peace Pole Project is an official project of The World Peace Prayer Society (WPPS), a non-profit, non-sectarian organization supported by individuals of all nationalities and faiths dedicated to uniting the hearts of humanity through the universal message, May Peace Prevail on Earth. The Peace Pole Project serves as a worldwide grassroots effort to bring the powerful message of peace to the people of all ethnic back round and cultures. Everyday, the growing number of members and supporters around the world are working together to carry the universal message of peace to their communities on every continent.
In addition, on behalf of The World Peace Prayer Society and its supporters, it is truly my honor to present this 8 foot handcrafted Peace Pole to the citizens of the Falls River community to commemorate the Fall River Peace Pole Initiative.
This Peace Pole bears Messages of Peace on each of its four sides:
May Peace be in the United States of America, May Peace be in our Homes, May Peace be in our Communities, May Peace Prevail On Earth.
Now, more than 40 Peace Poles offered by the Fall River Peace Pole Project will officially join the network of over 200,000 Peace Poles that have been dedicated to world peace in every country throughout the world. May Peace Prevail On Earth!”