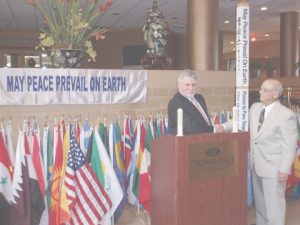 The World Peace Prayer Society was invited to take part in four events for peace in the Boston area by M. David Cohen, Jewish Chaplain. The project began as a commemoration of Armed Forces Day at Cushing Chapel, but the focus and venues shifted over the approximately two months of planning.

The World Peace Prayer Society donated a Peace Pole, and Chaplain Cohen purchased a number of small desktop Peace Poles to give as gifts and acknowledgements.

Chaplain Cohen says that these events were just the beginning, and he has plans for further peace events throughout the State. May Peace Prevail in Massachusetts.

The World Peace Prayer and Flag Ceremonies were facilitated by Deborah Moldow, WPPS Representative at the United Nations.