The United Religions Initiative at the United Nations (URI-UN), a Cooperation Circle of the United Religions Initiative, has chosen the International Year of Reconciliation as the overarching theme for its 2009 events. Kicking off this series was a double event held on Thursday, January 29th to launch the Year of Reconciliation, along with the annual 64-day Season for Nonviolence honoring the legacies of Mahatma Gandhi and Martin Luther King, Jr., from January 30th to April 4th.

URI-UN chose January 29th to welcome the Trail of Dreams, another Cooperation Circle of the URI Multi-Region, which would be in New York to walk from the United Nations to “ground zero,” the former site of the World Trade Center towers, before proceeding on the home stretch to Atlanta, where they would end their travels at the Martin Luther King Center during a ceremony respecting the day of Dr. King’s assassination. 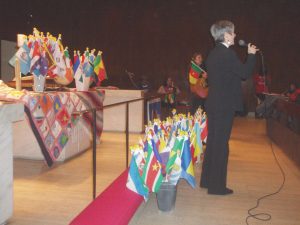 The day’s events began with a World Peace Prayer Ceremony in the lovely chapel of the Church Center across the street from the United Nations, where the Office of the Chaplain invited URI-UN to organize the weekly ecumenical prayer service. The Trail of Dreams World Peace Walkers arrived from Nigeria, Australia and Costa Rica. Monica Willard, URI’s Representative to the United Nations and WPPS Peace Representative, introduced them and Audri Scott Williams spoke briefly about their inspiring journey.

Everyone took part in a World Peace Prayer Ceremony with the flags of all nations to pray for peace and reconciliation in all the countries of the world. Deborah Moldow, UN Representative for the World Peace Prayer Society and facilitator of URI-UN, led the ceremony, with a “May Peace Prevail on Earth” chant provided by Native American musician Jackie Tice. 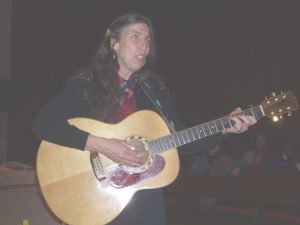 Brenda, who had joined the Trail of Dreams in Australia, closed with a message from an Aborigine elder. Deborah offered Audri a mini-Peace Pole, and Audri said the group was invited the next day to Newark, New Jersey, where they would plant two Peace Poles!

The second part of the day’s events was a monthly meeting of the NGO Committee on Spirituality, Values and Global Concerns-NY (CSVGC-NY), which was founded by URI-UN member Diane Williams and is currently chaired by URI-UN co-facilitator Audrey Kitagawa. The Trail of Dreams walkers were introduced, and described the deep philosophy underlying their journey, connecting from heart to heart with people of widely divergent cultures and religions across the globe. Language was never a barrier when everyone spoke the same language of the heart. Deborah continued the closing meditation as the flags of all nations were distributed among the 50 people in the room. She asked everyone to hold the flags tenderly, envisioning six billion people held in our hands, while Jackie Tice played her native flute.

All held the flags out as the Peace Walkers went down the aisle, followed by the representatives of the Nonviolent Peace Force, and Jun Yasuda, a longtime peace walker from the Grafton Peace Pagoda in New York State, receiving the blessings of the CSVGC-NY members in the spirit of nonviolence, reconciliation and a world at peace. All raised their voices in a joyful, “May Peace Prevail on Earth!” 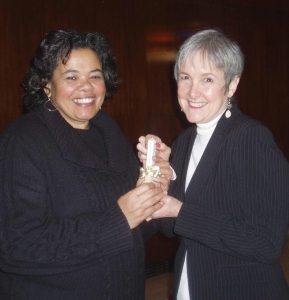