WiseUSA 08, a global non-partisan program of The Gaiafield Center for Subtle Activism at the California Institute of Integral Studies, has worked diligently to bring people together in meditation and prayer during the USA-2008 Presidential Election season.  Many groups and organizations from around the world worked in conjunction to form Wise USA 08, such as:  Common Passion, Culture of Peace Initiative, The World Peace Prayer Society, Wisdom of the World, Vessels of Peace and the Zambuling Institute of Human Transformation.

The Global Link Teleconference, honoring the heart and soul of America, was recorded live from THE WORLD PEACE SANCTUARY in Amenia, New York, Headquarters of THE WORLD PEACE PRAYER SOCIETY (WPPS) in collaboration with the All One Now Network:  www.allonenow.org

Hundreds of people from around the world participated.  This was a monumental time in history for the United States of America.  A very special USA Flag Ceremony was held in honor of this occasion at The World Peace Sanctuary.   The entire program and flag presentation was brought to Ustream viewers live in color.  Staff and volunteers of WPPS presented the state flags as they were announced in alphabetical order.  Each of the 50 states were announced, followed by a responsorial, proclamation, May Peace Prevail on Earth!!

The event was hosted by Fumi Johns-Stewart, Executive Director of WPPS and joined by Special Guests Speaker, David Nicols, Director of Gaiafield Center for Subtle Activism. 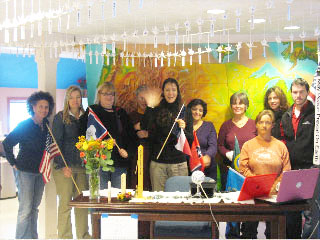