It started in 1996 that Slovakia joined The Peace Pole Project of The World Peace Prayer Society (WPPS), thanks to Mr. Emi from Japan, member of WPPS.

During the course of one month, 100 Peace Poles were transported from Japan to Koŝice in the eastern region of Slovakia.  It was during this time that The Peace Pole Project of WPPS in Japan began its outreach to other parts of the world. Needless to say, it took some effort to have it understand and accepted by the people of Slovakia. But in just a short time the White Harmony Foundation and the Humatrend Peace School Civil Society in the city of Koŝice started to spread the message, May Peace Prevail On Earth!  One-by-one the one-hundred Peace Poles traveled from eastern Slovakia to other areas throughout the country. Forty-one Peace Poles were planted along the way as they traveled through cites and villages.  Forty-nine Peace Poles were planted at Kojŝovskâ hoľa peak which is 1242 meters high; a mountain known as Peace Mountain.

Eight Peace Poles were planted at the World War II field, referred to as Peace Meadow, located in Bratislava, the Capital of Slovakia. The last two Peace Poles were erected in front of an ancient castle in the small village known as Biel. 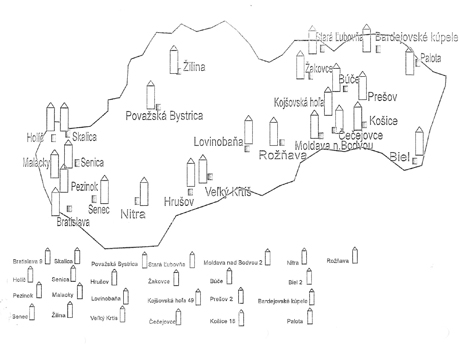