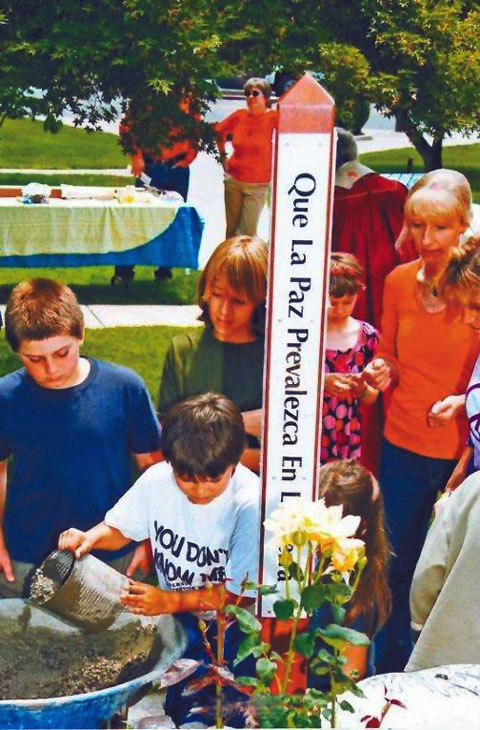 Students dedicate a Peace Pole in Grass Valley at the United Methodist Church. The local chapter of Grandmothers for Peace is raising money and exploring locations to erect a similar pole in Nevada City.

A group of peace-loving grandmothers will soon go before the Nevada City Planning Commission with plans to erect a “peace pole” in town.
The idea for such an obelisk was supported by the Nevada City Council, which directed Grandmothers for Peace to bring the issue up with the commission.
The Peace Pole, with message, May Peace Prevail On Earth in English, Spanish, Chinese and Maidu, would bear resemblance to a similar Peace Pole near the United Methodist Church in Grass Valley, raised last year.
The women are also raising money for the proposed new Peace Pole in Nevada City and have begun promoting peace messages on the back of Gold Country Stage buses.
“We’re trying to find all kinds of different ways to bring peace in the people’s consciousness,” said Shirley McDonald, a member of Grandmothers for Peace International, an Elk Grove-based organization founded in 1982.
The organization has chapters across the United States, Europe and South Africa, with a local presence for the past six years, McDonald said. The group also exhibits each year at the Altar Show at the Nevada County Fairgrounds.
A half-dozen possible locations for the Peace Pole have been identified in Nevada City. McDonald said city staff and her group are looking to narrow the list down in advance of an upcoming planning commission meeting.