On Saturday morning 22 September 2018 people gathered at the Peace Garden in Warwick Queensland, Australia to celebrate the dedication of a Peace Pole

The Baha’i Community of the Southern Downs Region wanted to leave a lasting memento to commemorate the Bicentenary of the Birth of Baha’u’llah, the Founder of the Baha’i Faith. The Peace Pole was chosen through The World Peace Prayer Society. “When we started looking in to the Peace Pole Project we found the principles of the Project resonated with the Baha’i teachings of world peace and that the earth has one humanity, one human family.”

The Baha’i Community worked with Friends of the Warwick Peace Garden and the local Southern Downs Regional Council to help see their vision come to light. 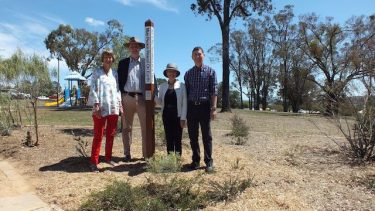 “Bahá’ís believe the crucial need facing humanity is to find a unifying vision of the future of society and of the nature and purpose of life. Such a vision unfolds in the writings of Bahá’u’lláh.” per www.bahai.org

The day also celebrated the UN International Day of Peace which was on the 21stSeptember.

Local dignitaries Mr James Lister MP, Member for Southern Downs attended and spoke about peace being more than an end to conflict and the Mayor of Southern Downs Region, Tracy Dobie also spoke, dedicated and unveiled the Peace Pole.

Graeme Eldridge on behalf of the Baha’i community dedicated the Peace Pole with the words of Baha’u’llah inscribed on the pole “The earth is but one country and mankind its citizens”. 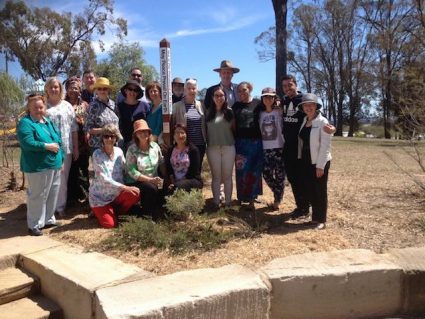 Friends at the Peace Pole dedication, including James Lister MP and Mayor Tracy Dobie. The feature of the dedication was the saying of the words “May Peace Prevail on Earth” by people in eight different languages, – English, Hindi, Spanish, Dutch, Pidgin English (PNG), German, Tagalog (Filipino) and Farsi, highlighting the bringing together of people from different countries.

Afterwards all enjoyed refreshments, and people lingered, discussing the Peace Pole and ongoing plans for the Peace Garden.

Spiritual Assembly of the Baha’is of Southern Downs Region