WPPS members of Hiroshima organized the annual World Peace Flag Ceremony in front of the atomic bomb dome in the heart of the Hiroshima Peace Park on August 6th. 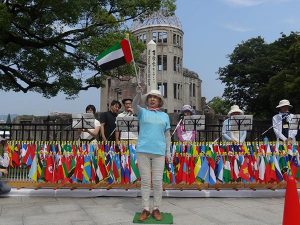 WPPS in collaboration with James Twyman of World Peace Pulse hosted a live synchronized global meditation at the exact moment the bomb was dropped 71 years ago along with a musical offering of peace songs by James.

The message and prayer, May Peace Prevail On Earth, authored by Masahisa Goi of Japan rose out of the ashes of Hiroshima and Nagasaki as a message of peace, hope and reconciliation.  The peace message has now touched the hearts of men, women and children the world over and continues to awaken the consciousness of the global family.

WPPS in collaboration with James Twyman of World Peace Pulse hosted alive synchronized global meditation at the exact moment the bomb was dropped 71 years ago along with a musical offering of peace songs by James. 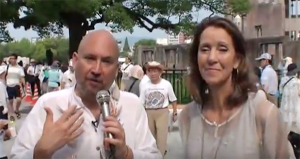 THE LIVE WEBCAST WAS A GREAT SUCCESS!

Thousands watched the live broadcast to connect their hearts with Hiroshima.

The Hiroshima Buddha in Nara

At the same time in Nara, Japan, a World Peace Flag Ceremony was held at the Gokurakuji Buddhist Temple hosted by Chief Priest Tanaka.  The Temple houses the Hiroshima Buddha which went missing during the construction of the Hiroshima Peace Park and made its way miraculously to Gokurakuji Temple.

on May 27th, 2016.  His visit of reconciliation and healing was received with great appreciation and touched the hearts of the citizens of Hiroshima.  In gratitude and in honor of his visit, WPPS members of Hiroshima sent President Obama a Peace Pole.

Let’s all hope that it will be planted soon in front of the white house!