The 2015 International Day of Peace began at the United Nations with Secretary-General Ban Ki-moon and the President of the70th General Assembly ringing the Peace Bell while 193 students raised the flags of the Member States during the Minute of Silence. 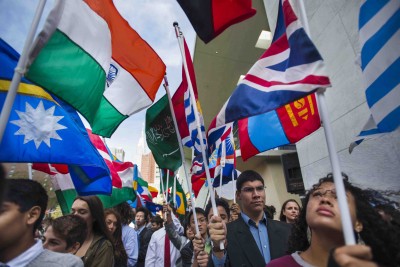 Following the ceremony, the Secretary-General joined 800 people in Conference Room 4 to begin the student program on the 2015 theme, “Partnerships for Peace–Dignity for All.” A full webcast of the event is at http://webtv.un.org/search/international-day-of-peace-2015-student-observance/4499625827001?term=International%20Day%20of%20Peace 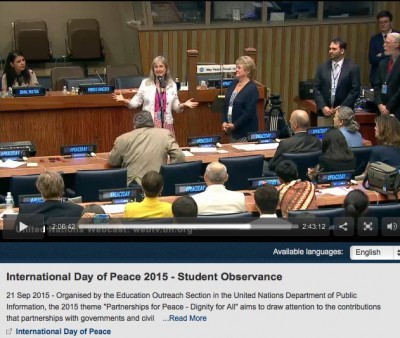 The program was full of celebrities and rich with information and inspiration. Speakers included Secretary-General Ban Ki-moon; Messengers of Peace Dr. Jane Goodall, Michael Douglas and Yo-Yo Ma; UNESCO Goodwill Ambassador for Intercultural Dialogue Herbie Hancock; the Secretary-General’s Envoy on Youth, Mr. Ahmad Alhendawi; Youth Moderator Ms. Zuhal Sultan, the founder of the National Youth Orchestra of Iraq; and the students from UNIFIL in Beirut, Lebanon, who were present live via satellite. 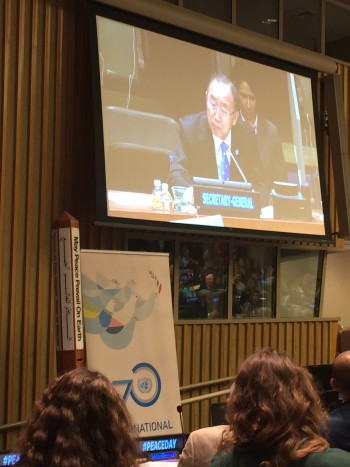 Another memorable moment was when a Security guard brought in a dog in response to Dr. Jane Goodall’s desire to have the non-human community represented. Dr. Jane immediately went to greet this special guest by the Peace Pole in the chamber. 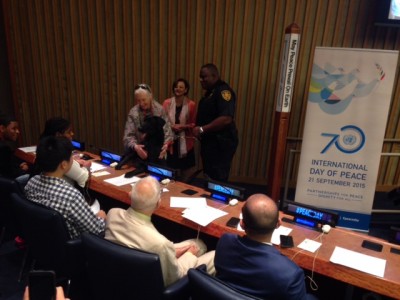 The program concluded with a special 70th Anniversary Flag Ceremony for World Peace developed by the UN Department of Public Information. William Yotive, Education Outreach Director, showed the progression of countries joining the United Nations over the past seven decades by asking the students holding flags of the 193 UN Member States to rise in turn showing the decade in which that country had joined the United Nations. 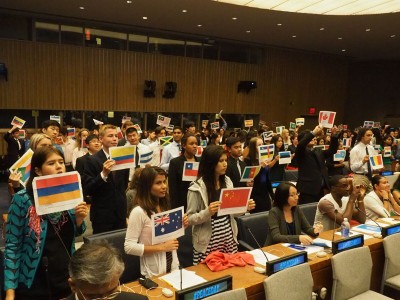 An accompanying slide show demonstrated show the growth from 51 Member States in 1946 to 193 in 2015. Then everyone was asked to hold high a paper flag of the United Nations and say together, “May Peace Prevail on Earth.” Mr. Yotive then asked them to repeat the message with more energy, and the call for peace rang out through the United Nations.