The International Day of Peace Committee at the United Nations held its first meeting of the year to discuss the UN’s theme for 2015, “Partnerships for Peace – Dignity for All.” Susana Bastaricca, organizer of the Vigil for International Peace and Ecology in Central Park, New York since 2002, and to the U.N.S.R.C. SaluS Well-Being Network offered the staff lounge at the United Nations for the gathering, which drew close to 60 participants including NGOs, artists, musicians, educators, volunteers, and more. Everyone discussed plans for September 21st. 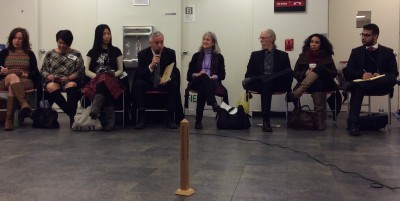 Special guest was Bill Yotive of the UN Department of Public Information, who acknowledged the work of civil society alongside governments since the birth of the United Nations as the basis for this year’s theme. A Peace Pole held the center of the large circle throughout the meeting and everyone closed with “May Peace Prevail on Earth!” 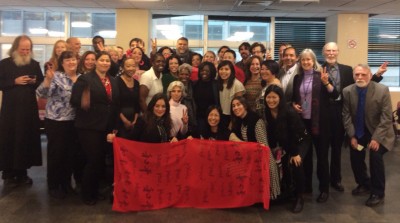