A 167th Airlift Wing crew transported a Peace Pole from Martinsburg, W.Va., to Bagram Air Field, Afghanistan, on a C-5 Galaxy in January-2014.

Every step of the way, it’s been a matter of the heart, and of the children’s love.

The issue of a peaceful world for children has been pivotal for us at the Communities of Peace Foundation since our dedication of a Peace Pole for the Pentagon in September of 2000.  At that event, in the Secretary of the Army’s Conference Room, a little eight-year old girl stated her intention of starting a long narrow  children’s peace quilt that would contain the children’s love and their feelings of what “peace on earth” would be like for them.  (It would follow a similar model made mostly by adults and conceived by James Twyman.) 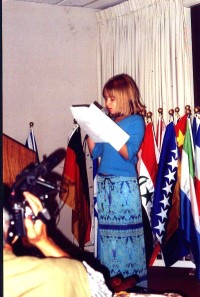 That peace quilt, The Children’s Cloth of Many Colors-(CCMC), is now over 1/3 mile long, containing sections from thousands of children in 32 countries, including Afghanistan.  Our recent gift of a Peace Pole to the government of Afghanistan has involved many children and young people, a gift of a section of the CCMC, the US military, the state department, military public affairs people, the Embassy of Afghanistan in Washington DC and the US Embassy in Kabul. 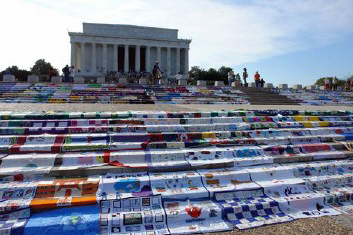 Kind hearts have made each step possible.  The Communities of Peace Foundation has been sponsoring international exchange programs with local children (Fauquier County, VA) and Afghan children for ten years or so.   Last September, after attending the United Nations High Level Forum on the Culture of Peace, Ms. Gerry Eitner, president of the Communities of Peace Foundation resolved to up the ante, and to interact with the government of Afghanistan.  The country is a focal area now, with the world’s attention on the subject of war and peace.  When all other things have been tried, can we somehow create a solution that will mean a peaceful world for our children? Ms. Eitner reconnected with a longtime Afghan friend who had just returned to the US from working with the Afghan High Council for Peace.  She explained that this was indeed a government agency, dedicated to creating internal peace in Afghanistan.  She connected Ms. Eitner with both the High Council people and the officials from the Embassy of Afghanistan in Washington DC. 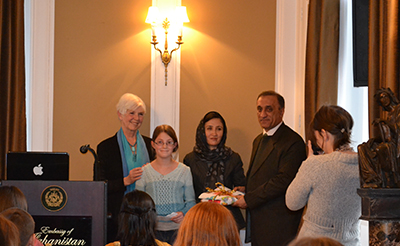 With these connections, they set up a two-stage gift to the Afghan High Council for Peace.  The first was a gift of a section of the CCMC made by 75 fifth-graders at the local PB Smith Elementary School.  This was presented by the children to the Afghan embassy officials this past December, then personally by Ms. Eitner to the visiting Chairman of the High Council, in an hour-long meeting.  At this meeting, she described the next stage gift of the Peace Pole, which would arrive at the Bagram base in Afghanistan in a US military plane.  Chairman Salahuddin Rabbani graciously accepted the two gifts, and committed to displaying them in a prominent place in Afghanistan after the April elections. 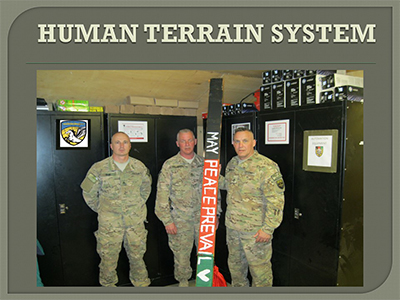 The Peace Pole was flown to Afghanistan in January-2014, initiated by a military pilot who has been a longtime collaborator of Communities of Peace.  He involved the 167th Air Wing of the Air National Guard, who were most gracious in their assistance.   Ms. Eitner contacted a sergeant at Bagram who had been communicating with the fifth-graders and asked him if he would protect the Peace Pole until it could be transferred.  Again, he was most gracious and helpful.  He assisted in the transfer to its current location in the offices of the Afghan High Council for Peace.  The ongoing story has initiated the interest of Pentagon officials. 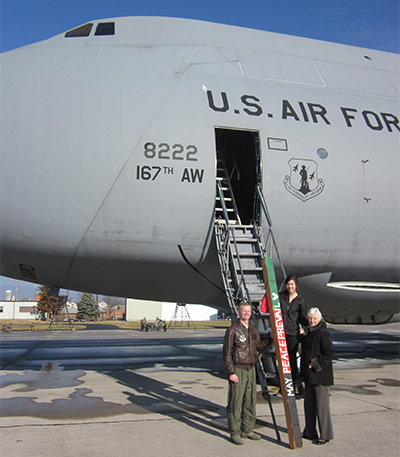 The High Council would like to involve the women and children of Afghanistan in the upcoming dedication of the Peace Pole.  They have invited Ms. Eitner to come for the dedication –  Ms. Gerry Eitner is currently engaged in conversations with them about how Communities of Peace might play a part in this next stage.