Sending a few photos while it is on my mind. It was a beautiful event shared between the Geelong Interfaith and The City of Greater Geelong.We began with introductory remarks by myself, who was MC, Monsignor Murray, who is the Interfaith Chairperson and Councillor John Irvine, who was representing the Mayor. This allowed people to hear about the International Day of Peace itself, what peace means, coming from Monsignor and also the Mayors for Peace initiative, of which Geelong is a member city as of 2010.

From here we had Veema Mooniapah, from Mauritius, read an Interfaith prayer, containing one line from all the main faiths. Veema is our liason person between the City and Interfaith and has done so much to help bring this day into fruition. She has also managed to get a commitment from the City Council to put IDP on their calendar as a permanent yearly event. I am so glad I followed my intuition earlier in February to start the process for this event to occur.

We then encouraged participants to carry up to three flags each as we did a peace walk around the block of City Hall. The sun shone and there was so much joy emanating as we did our circuit. On return to our starting point, the local paper took a group photo. I hope to get hold of a copy. 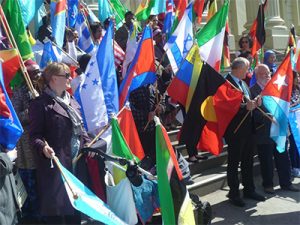 From here we began the World Peace Flag Ceremony, announcing each country and saying, ‘May Peace Be in (country name).

We were overjoyed that many refugees from the Karenni people and South Sudan took part in our ceremony today. People from other nations were also present. To have them possibly carry their own flag and many flags of other nations was superb! 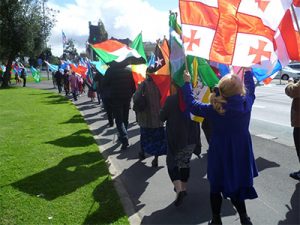 As this ended I formally presented the portable Peace Pole to John Irvine, on behalf of Geelong Interfaith and it is now resident in the Foyer of City Hall…Yehhhhh! 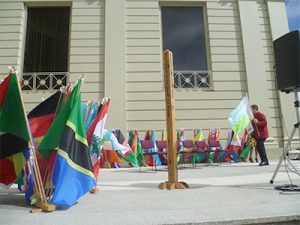 We ended our ceremony with a musical item from the group ‘Like Honey’, being made up of some of my beautiful acabella teachers/cohorts, Belindal McArdle, Lisa Singline and Sue Hindle. Peace based songs gladdened all our hearts.

Off for refreshments in City Hall to close the morning…by then early afternoon.

Tomorrow, many of us are meeting at the Botanic Gardens in Geelong at 1pm to do another ceremony by the Peace Pole we donated in 2004. It just felt right to join again on the actual day.

My love to you all,

May Peace Prevail On Earth