Mr. William E. Strickland, social innovator and the President and CEO of the non-profit Manchester Bidwell Corporation (MBC), led a ceremony honoring the visit of Mr. Hiroo and Mrs. Masami Saionji and their daughter Yuka. The Saionji’s are the leaders of the Goi Peace Foundation in Tokyo, Japan and Chair and President of The World Peace Prayer Society. 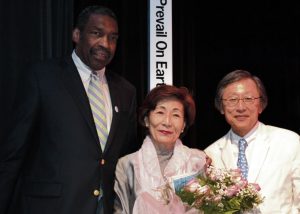 The Peace Pole made by WPPS NY office were handed to Mr. Bill Strickland and gifted to Manchester Bidwell Corporation.

The main purpose of the extended tour, during which the Saionji’s audited youth and adult classes and to learn about MBC’s social enterprises, is to begin the process of creating a center for the tsunami victims in Northern Japan. The center will be based on Manchester Bidwell Corporation’s distinct combination of youth arts and adult career training in an empowering, hopeful environment.

Pharmaceutical Class. The class provides real skills to students that are most wanted by the top pharmaceutical companies.

This opportunity for Pittsburgh to extend its cultural impact overseas is a direct result of Mr. Strickland winning the annual Goi Peace Award in 2011.

Established in Tokyo, Japan in 1999, The Goi Peace Foundation is dedicated to promoting world peace through various educational and outreach programs including The Goi Peace Award. The Goi Peace Award selection committee chose Bill Strickland “in recognition of his visionary social work to help the underserved population transform their lives.” In November of 2011, Strickland traveled to Japan to receive the honor.

The Saionji family, deeply touched by the suffering brought to Northern Japan by March 2011’s devastating tsunami, connected MBC’s proven ability to manufacture hope through its programming to the needs of tsunami survivors.

The Saionji family took me to visit the areas hardest hit by the disaster. Entire villages had been washed out to sea. The region and the lives of the people in it were destroyed. After my shock wore off, I realized we had to help these people. We already have a structure for how to restore hope to depressed areas – we just need to implement it in Northern Japan,” says Strickland.