I received your questionnaire about the Peace Pole I recently purchased.

In our travels, Wayne and I had seen Peace Poles on the equator in Ecuador, in church gardens and parks throughout the United States and Canada, and on the Isle of Iona in Scotland, where in 563 AD, Saint Columba, of Ireland founded a monastery. From there he set about the conversion of Scotland and much of northern England to Christianity.

“Seeing these Peace Poles always caused us to pause and say a prayer for world peace!”

Wayne was diagnosed with Pancreatic Cancer in March, 2009 and passed away in September, 2009. The following spring, the West Sunbury United Presbyterian Church in West Sunbury PA, where he was serving as pastor, was planning a garden at the entrance to the church. They originally talked about it being a “Memorial Garden”, but after some discussion, it was decided that we call it a “Peace Garden”. As part of that, I wanted to contribute to the garden. There was nothing more fitting than planting a Peace Pole to remind us of his hope for peace. I hope seeing this message as we enter this building will also encourage us all to pray for peace in this world. 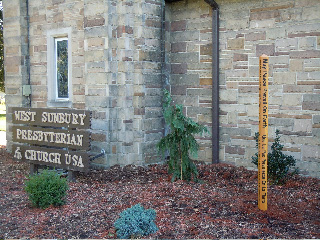 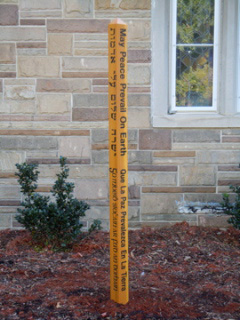 On the one year anniversary of his death, the people of the church has a “Remembrance Service.” As part of that service, we had a butterfly release. We all gathered around the garden and the Peace Pole, with violin music in the background, and released the butterflies. They fluttered around, landing on people, flowers, the side of the building, and on the Peace Pole, then one by one flew away. 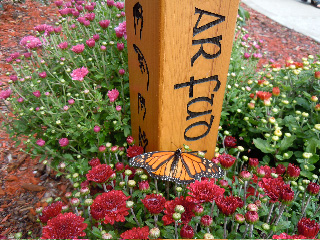 The young girl in the photos is my granddaughter, Sierra. There is a picture of my son, Jason (with a butterfly on his shirt) with Sierra and the latest addition to our family, Silvi. 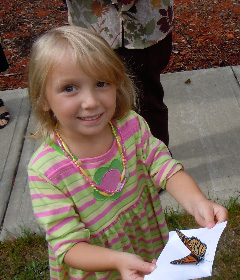 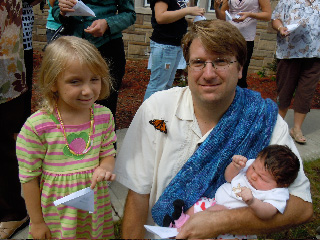 It is my hope that seeing this message for peace as we enter this place of worship will remind us all to pray for peace in this world.