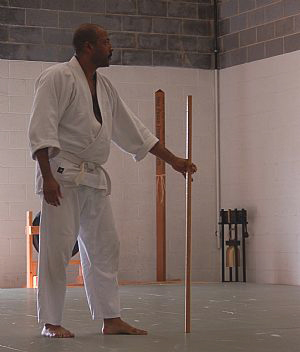 On Saturday, March 27, at noon Aikido in Fredericksburg will plant a Peace Pole and conduct a World Peace Flag Ceremony at their new facility near Massaponax in Spotsylvania at 6155 Hickory Ridge Road.
The Peace Pole Project was started in Japan in 1955 by Masahisa Goi, who decided to dedicate his life to spreading the message, May Peace Prevail on Earth, in response to the atomic bombings on Hiroshima. Peace Poles are handcrafted monuments erected the world over as international symbols of Peace. Their purpose is to spread the message May Peace Prevail on Earth in a different language, one on each side.
The program will include the planting of a Peace Pole next to the Aikido in Fredericksburg dojo and the carrying of the flags representing all the countries in the United Nations while saying May Peace Prevail on Earth.