T.Y.S. Lama Gangchen Tulku Rinpoche, a Tibetan Buddhist lama and healer, met WPPS UN Representative Deborah Moldow at the United Nations on Thursday, June 19th during a rare visit to New York. The two first met in 1995, when Deborah introduced the Lama to the UN community. Over the years, he has conducted World Peace Flag Ceremonies and Peace Pole plantings in several parts of the world.

Lama Gangchen led prayers for peace in the UN meditation room and at the beautiful gold stupa containing relics of the Buddha that stands outside the General Assembly Hall. Lama Gangchen, who had traveled the world with the relics and was instrumental in bringing them to the UN, placed the Peace Pole on the stupa before beginning his prayers. The small Peace Pole shone with a special glow in all the photos, and everyone prayed together, “May Peace Prevail On Earth.” Deborah offered the Peace Pole to Lama Gangchen, who promised to take it with him everywhere he goes in his travels around the world. 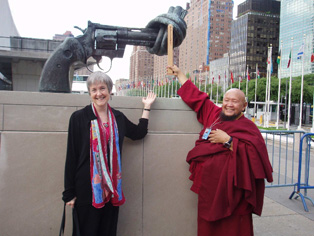